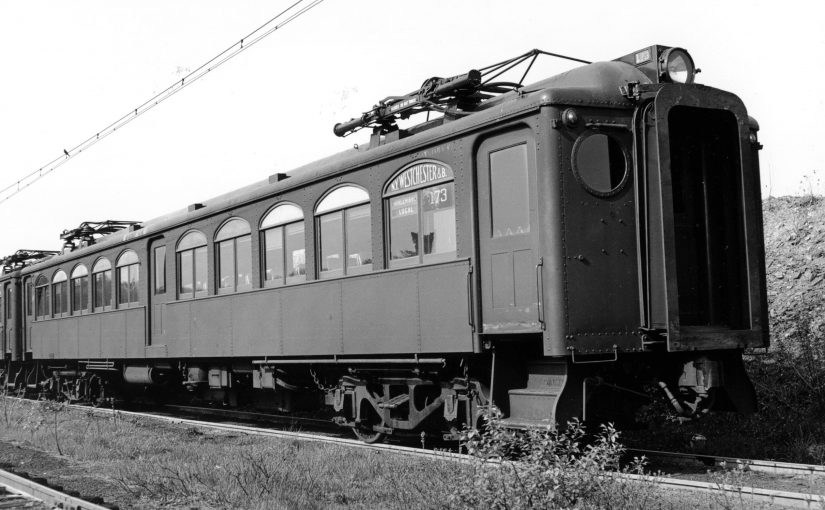 The first order of cars came from Pressed Steel Car Co. of Pittsburgh, Pa., and consisted of 28 coaches and two combines. These cars had full vestibuled ends, and power-operated center doors. Theses were among the first center-door cars ordered for a common-carrier railroad in America. Center-door equipped cars would later become popular with rapid transit operations. All of the Westchester stations were constructed with high-level platforms, except for the stations on the Harlem River branch. For this reason, the cars were also equipped with steps and trap-doors on the vestibule ends.

As built, the electric multiple-unit coaches were 70 feet, four inches long, with 35 seats arranged in 2-2 fashion, with four longitudinal seats flanking the center doors. Total seating capacity in the initial order of cars was 78. As built, the combines could seat a total of 54. The combines were rebuilt in-house in 1922 as 80-seat coaches. Pantographs collected 11,000 volts a.c. from the overhead and transformers stepped it down to 350 volts, which supplied the two 175 hp a.c. traction motors on each car. The NYW&B purchased their power from parent New Haven’s generating station at Cos Cob. Looking to trim costs, motormen were instructed to coast whenever possible in an effort to conserve energy. Automatic overspeed controls limited the top speed of trains to 56 mph.

The Westchester was one of the first roads to use a pressurized spray to apply paint finishes, versus the brush painting that was common in those days. The cars were delivered with dark green interiors and ivory ceilings, with blue plush seats. They were finished in the same exterior dark green color as parent New Haven, with the NYW&B name and car number above the last window in the arch. The New Haven purchased the last group of m.u.’s, and stencilled “N.Y.N.H.&H.R.R.Co.” on the car sides near the end doors to signify ownership. The tops of the cars were originally dark gray, but steel dust raining down from the catenary wire quickly turned the gray to brown steel oxide. The oxidation would collect on the top of the cars and wash down the sides, making it very difficult to keep them looking clean. In the interest of easier catenary maintenance and cleaner looking cars, the steel contact wire was replaced with copper in 1923.

Service began on the NYW&B with 30 cars, but as the routes were expanded, additional cars were needed. Between 1924 and 1929, an additional 65 cars were added to the roster. After the end of service, New Haven acquired 50 of the coaches and locomotive 701. The coaches were taken to New Haven’s Van Nest shops in the Bronx where they had their electrical equipment and pantographs removed. Then, they were brought to NH’s Readville, Mass., shop where they were rebuilt into commuter coaches for their Boston suburban service. The U.S. Maritime Commission acquired some cars for use in transporting war workers to ship yards and oil fields in Texas and California, and then were subsequently scrapped.

One sole example of the venerable Westchester electric m.u. fleet exists to this day in Peru. Attempts to repatriate this car have not yet been able to overcome the obstacle of funding, or a plan for preservation.

Note 7 – Boxcar 5 was equipped with a pantograph to draw power off the overhead wire that was then routed to a transformer to power the onboard machine tools. While the only view available to us shows a “blind” wall, it is assumed the opposite side had a standard freight door.

Note 8 – NYW&B’s sole locomotive was built in August 1911, delivered as 01, then renumbered 301, and finally 701. Upon the end of service, the unit was transferred to the New Haven and became NH 0224 until it was scrapped (date unknown).

Note 9 – Combination line car and wrecking car with revolving jib crane and detachable linemans platform on boom. Built by General Electric in April 1911. Renumbered 401 in 1914, the car was used by the contractor to dismantle the line in 1942, and then itself was scrapped on site.